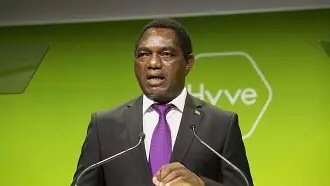 The International Monetary Fund (IMF) has granted Zambia $1.3 billion in support as part of an agreement to restructure the massive debt that has sunk the southern African country’s economy.

In 2020 during the pandemic, Zambia became the first African country to have defaulted on its estimated $17.3 billion external debt.

In addition, growth “has been too low to reduce poverty, inequality, and malnutrition rates, which are among the highest in the world,” the Fund said.

“Zambia is in debt distress and needs a deep and comprehensive debt treatment.”

In past negotiations, previous governments have failed to unlock bailout packages.

But since the election of President Hakainde Hichilema last year, progress has been made in restoring relations with creditors.


IMF program Zambia
how can we help you?