HomeNewsEconomicsWorking Toward a Green, Resilient, and Inclusive Recovery

Working Toward a Green, Resilient, and Inclusive Recovery 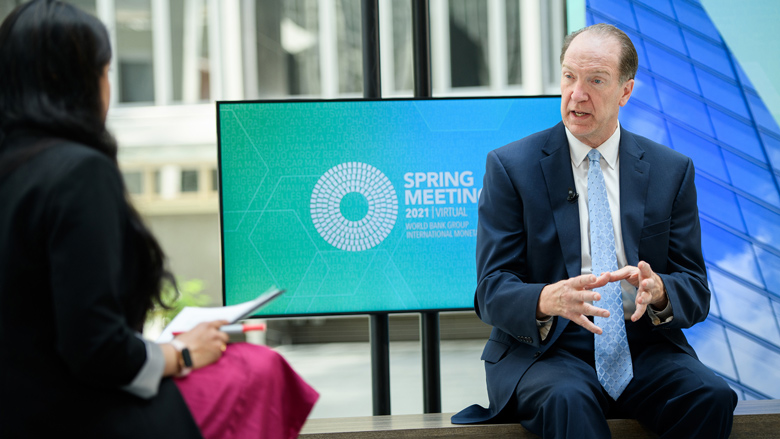 The COVID-19 pandemic has caused an unprecedented health, economic, and social crisis. It is threatening the lives and livelihoods of millions, increasing poverty and inequality, and reversing development gains. To move toward a global recovery will require sustained, differentiated, and targeted financial and technical support to governments and the private sector.

These were key messages from the Development Committee, a ministerial-level forum that represents 189 member countries of the World Bank Group and the International Monetary Fund, in a communiqué issued at the institutions’ Spring Meetings. The committee encouraged the Bank Group and the IMF to continue working closely together and with other partners in assisting developing countries’ COVID response.

The meetings also included a series of flagship events that were open to the public and are accessible online. These brought together global thought leaders for discussions of climate, debt, vaccines, and economic recovery.

In his speech to the London School of Economics before the meetings, World Bank Group President David Malpass noted that COVID has compounded many “slow-burning crises,” including conflict and violence, a high number of refugees, stagnant median incomes, unsustainable debt, and the damage from climate change. He urged a move toward “opportunities and solutions that achieve sustainable and broad-based economic growth without harming the climate, degrading the environment, or leaving hundreds of millions of families in poverty.” He emphasized that

Both the committee and Malpass welcomed progress on debt sustainability for the world’s poorest countries; this is helping free up fiscal space for key investments in human capital that are critical to long-term economic recovery. Prior to the meetings, the G20 extended the Debt Service Suspension Initiative through the end of 2021. As Malpass noted in his speech and at the meetings’ opening press conference, the Bank Group and IMF are also working closely together on implementation of the G20’s Common Framework to deal with cases of unsustainable debt. In remarks to the G20, Malpass observed that the poorest countries will also need more support through grants and highly concessional resources from IDA; he welcomed G20 support for moving up the next IDA replenishment by one year.

The committee stressed the World Bank Group’s important role on climate change. Already the largest multilateral source of climate investments in developing countries, the Bank Group has increased this financing to record levels in the past two years. The communiqué and a statement from Malpass highlighted key features of the Bank Group’s Climate Change Action Plan for 2021-2025, including an ambitious new target to direct 35% of its financing to climate on average, and a commitment for at least 50% of World Bank (IBRD/IDA) climate financing to support adaptation and resilience. The Bank Group will also align all its financing flows with the goals of the Paris Agreement: by mid-2023 for IBRD and IDA, and by mid-2025 for IFC and MIGA. In addition, the Bank Group will step up its support to countries’ Paris climate commitments and will pursue transformative investments in the sectors that contribute most to emissions.

In endorsing the focus on green, resilient, inclusive development—the GRID approach—the committee noted that the World Bank Group is well positioned to help countries with the challenges ahead through its convening power, global reach, and capacity to mobilize finance, technical assistance, and knowledge for both the public and private sectors. Malpass struck an optimistic note in describing the Bank Group as a key champion in improving development outcome.