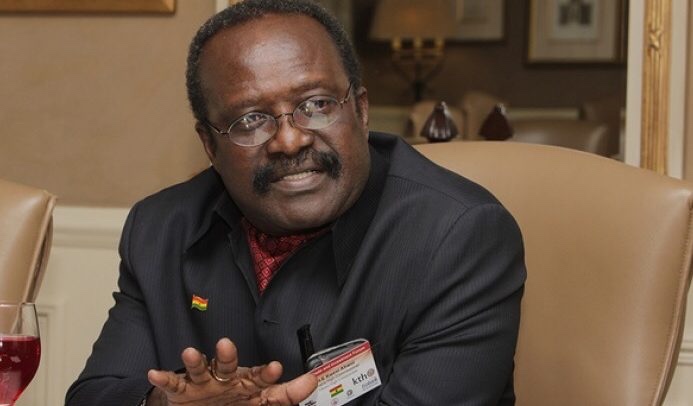 A former Minister of Food and Agriculture under the Mills administration, Kwesi Ahwoi has suggested to the government to work on the inordinate taste of Ghanaians for foreign goods in order to make the One District One Factory(1D1F) programme succeed.

He said it will be pointless to operate the factories if the products are not patronized by Ghanaians.

Asked whether the 1D1F is the panacea to Ghana’s industrialsaition challenges while speaking on TV3 New Day with Johnnie Hughes on Thursday June 2, regarding a yet-to-be launched book titled “The Children of House No. D13 South Suntresu Kumasi”, he said “It could be the panacea if the direction is put right.

“You just can’t put a factory anywhere when there is no raw material base, when the demand is not there. So the demand has to be there.

“Everything that you produce must have a market and Ghanaians typically have a state for foreign products. We do not appreciate that which is locally ours.

“So you have to make a concrete efforts to develop the taste of Ghanaians so that they will buy what you are producing. Otherwise we will produce and at the end of the day there will be no market for it.”

President Nana Addo Dankwa Akufo-Addo said earlier that out of a total of two hundred and seventy-eight (278) 1D1F projects at various stages of implementation in all the sixteen (16) regions, one hundred and six (106) factories are currently operational, one hundred and forty-eight (148) are under construction, while twenty-four (24) projects are at mobilization stage.

Delivering the 2022 State of the Nationa Address in Parliament on Wednesday March 30, he said “Mr. Speaker, in order to bring the youth on board the 1D1F Programme, fifty-eight (58) out of the two hundred and seventy-eight (278) 1D1F Projects have been developed as enterprises fully owned by youth groups, with direct Government support. Each of these 1D1F Youth companies are owned by between forty (40) and fifty (50) youth as shareholders.

“In addition, five (5) medium scale state-of-the-art agro-processing Common-User Facilities (CUFs) have been established with direct support from Government and are owned by various groups of farmers, whose farming operations had previously been undermined through lack of processing facilities. These farmer-owned companies have been established in five (5) Districts, namely Dormaa West, Savelugu, Sefwi Akontonbra, Sekyere Central and Tarkwa Nsuaem. They cover oil palm processing, rice milling and the processing of maize into maize grits.

“Mr. Speaker, quite a number of global vehicle manufacturing companies have set up assembly plants here in our country, and started producing vehicles for our market and for the West African market. The well-defined Ghana Automotive Development Policy we outdoored in August 2019 has facilitated this welcome development.

“Since June 2021, Toyota and Suzuki brands of vehicles are being produced here, commencing with the production of Hilux Pickup and Swift models. VW and Sinotruck, which commenced commercial operations in 2020, have continued to assemble their brands of vehicles and are enjoying significant local patronage.

“In addition, a new state-of-the-art assembly plant with capacity to assemble 5,000 new vehicles per annum has been established by Nissan in Tema, which is currently producing Nissan and Peugeot brands of vehicles for the Ghanaian and West African markets. I will have the pleasure to commission this new plant in Tema tomorrow. Three other vehicle manufacturers, namely KIA, Hyundai and Renault are also expected to commence commercial production this year.