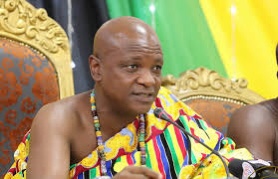 SAS Finance Group, owned by Togbe Afede XIV, the Paramount Chief of Asogli Traditional Area, has dismissed the claim by TV Host, Paul Adom-Otchere, that it made between ¢40 million and ¢100 million in advisory fees on various Government of Ghana Bond issuances since 2014.

In a press release, it said the statement was false, misleading and was made with malicious intent.

“We wish to state that the total fees earned by SAS from these mandates did not amount to, but was actually far less than ¢40million, and thus, cannot be presented as falling between “¢40million to ¢100 million”, as stated by Paul Adom-Otchere on the Good Evening Ghana Programme on Metro TV.

“We find the disingenuous attempt by Mr. Paul Adom-Otchere to draw SAS and its founder, Togbe Afede XIV, into the current debate about the apparent and patent conflict of interest in the selection of firms to act as Bond Market Specialists very distasteful”, it explained.

It stated the facts as “SAS acted as a co-manager of Government of Ghana Eurobond issuances in 2014 and 2015, and as sub co-manager of the 2019 and 2020 Eurobond issuances.  SAS was also appointed, through a competitive bidding process, as Joint Book Runner (JBR) of the Adinkra Domestic Bond Issuance Programme from late 2015 to late 2017.”

In addition “with regards to the Adinkra Domestic Bond Programme, the mandate of the JBRs expired at the end of 2017. There was an invitation for new tenders thereafter, and SAS submitted a bid but was not selected”.

“In respect of the multi-year Eurobond Programme instituted in late 2019, the foreign advisors, on behalf of the government of Ghana, sent an email to SAS in March 2021, with a letter for us to sign to withdraw from the programme”, it added.