HomeNewsAgricultureVolumes Of Cocoa Purchases Down By 32% In June – ICCO

Volumes Of Cocoa Purchases Down By 32% In June – ICCO 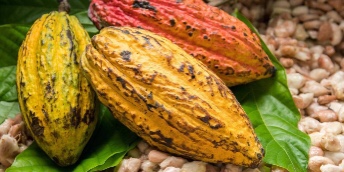 The International Cocoa Organization (ICCO) has reported that volumes of cocoa purchases in Ghana have plummeted by 32% year-on-year in June 2022.

The ICCO disclosed in its Cocoa Market Report for June 2022 that “In Ghana, the latest available information indicated that volumes of cocoa purchases were lower by 32% year-on-year from 961,000 tonnes to 651,000 tonnes”.

Likewise, the report revealed that as at June 19, 2022, “cocoa arrivals in Côte d’Ivoire were reported at 1.943 million tonnes, down by 5% compared to the level of 2.045 million tonnes seen at the same period of the previous season”.

Cumulative rainfall (in millimetres) and the average soil moisture compiled from the weather database of Refinitiv for the cocoa growing areas in Côte d’Ivoire and Ghana show that the trend for the current cocoa year and the two previous seasons are nearly similar.

“This evidence suggests that the current low level of arrivals and purchases in both countries are not necessarily attributable to the weather. As no bottleneck in the haulage of cocoa upcountry has been reported, other parameters like aging cocoa trees or cocoa-related diseases as well as poor agricultural practices could have contributed to reducing the yield of cocoa farms and subsequently lowering the level of arrivals and purchases in Côte d’Ivoire and Ghana respectively”.

The ICCO stated that during the last week of the month under review, the adequate meteorological conditions that prevailed in West Africa erased concerns regarding cocoa supply. Hence, the JUL-22 contract prices plunged by 4% on both markets moving from US$2,138 to US$2,062 per tonne and from US$2,376 to US$2,291 per tonne in London and New York respectively.

Prices and the stock-to-grindings ratio

The ICCO noted that as at June 2022, while a supply deficit is expected for the ongoing 2021/22 season, cocoa futures prices followed a downward trend which has mainly been triggered by economic uncertainties. A year back (June 2021), prices followed a downward trend as in the midst of the Covid-19 pandemic and the global cocoa market was expected to end the 2020/21 cocoa year with an excess supply.

“This situation clearly illustrates that the stock-to-grindings ratio is not robust enough to drive cocoa futures prices as the ‘severity’ of surplus/deficit depends on the volume of grindings for that specific year. Nevertheless, the observed discrepancy for the ongoing 2021/22 season is not as big as that of the 2011/12 cocoa year. The demand for cocoa is expected to overtake supply for 2021/22”.

The stock-to-grindings ratio is among the market forces of the cocoa market that determine cocoa price movements. It is obtained by dividing the end-of-season stocks of the previous cocoa year by the estimated grindings for the actual crop year.

The reason for the inverse relationship is that, higher values of the stock-to-grindings ratio suggest relatively abundant cocoa stocks that is available to satisfy the demand for cocoa processing and subsequently is anticipated to pressure down cocoa prices.

Notably, it does not account for parameters like currencies strength, inflation, and other fundamental factors which have a direct impact on price movements. The calculation depends on the precision and accuracy of statistics at the end of season of cocoa stocks and grindings.


Cocoa Production
how can we help you?