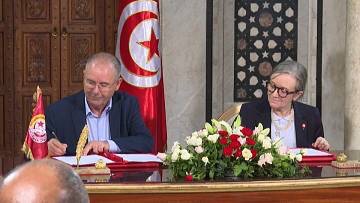 Tunisia’s government and the country’s main labour union (UGTT) struck a pay deal Thursday in the capital. The agreement involves a five percent annual hike to public sector wages every year until 2025.

The breakthrough comes after arduous negotiations and a general strike observed in June. The purchasing power of Tunisians had eroded since the beginning of the year amid rising prices, high unemployment and widespread poverty.

“Despite the delicate economic and financial situation, the government was keen to open negotiations on wage increases, Najla Bouden, Head of Government said. And to consolidate trust with the social partner in order to achieve the common objective of establishing social peace and supporting civil servants.“

Noureddine Taboubi, the head of the UGTT stressed on the importance of peace: “Our objective through this agreement is to establish social peace and to ease the tense social climate, in view of the very difficult social situation and the deterioration of purchasing power.”

The government continues to negotiate with the International Monetary Fund over a $2 billion bailout.


Tunisia
how can we help you?