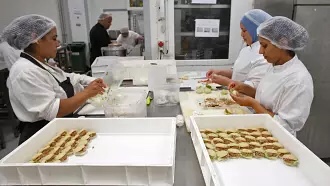 Cash-strapped Tunisia is facing a dearth of imported foodstuffs from dairy products to coffee, forcing informal rationing at supermarkets and threatening some food and beverage companies.

For weeks, consumers and businesses have been struggling to find essentials such as sugar, flour and cooking oil

Radhia Kamoun, CEO of the patisserie chain Gourmandise, says she is struggling to source key ingredients, while those that are available have surged in price.

“It’s full compared to a small cold room but it’s nothing at all, that’s two days and here four days maximum, so we are used to buying a week it’s for the week we’ve just started but since we don’t know what’s going to happen, that’s the concern”

Gourmandise, with 27 branches across the country, has had to raise its prices twice this year. The CEO describes the situation as the worst crisis since the business was founded in 1976 and blames the state for failing to communicate.

“Substitutes can be found for some products, but not for everything. So it’s serious, and we’re really waiting for a national solution. What I also criticise the government for, and this is very important, is the lack of communication. This is something very, very important. If we had known what was going on, if we had known what was going to happen, it would have reduced our stress and the time spent every day on finding solutions. But now, without any insight, it’s hard to manage.” added Radhia.

Since then, many international suppliers have stopped trusting Tunisia and are demanding cash up front for products and transport.

“Tunisia’s sovereign rating, which is triple C, is an important factor in this situation and on the credibility of Tunisian suppliers when they import products. That is to say that when they import wheat, oil or other products, the foreign supplier sets conditions to be paid in advance. That is to say, at the port, he (the supplier) wants to be paid before handing over the goods,”said Moez Hadidane, an economist.

Tunisia has been negotiating for months for a bailout loan likely worth two billion dollars from the International Monetary Fund, which is expected to demand painful economic reforms in return.


Food Processing Tunisia
how can we help you?