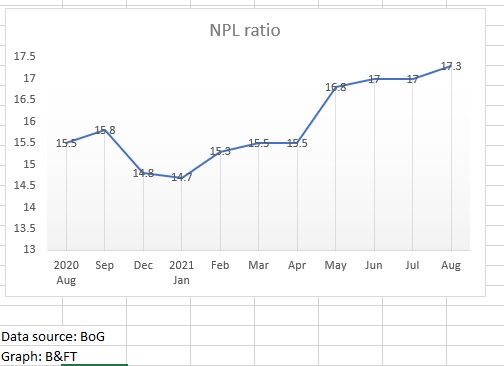 A new report by the Bank of Ghana has shown a worrying trend of growing non-performing loans in the assets of commercial banks, a situation banking consultant Dr. Richmond Atuahene blames on challenging economic conditions and government debt owed the private sector.

The summary of Economic and Financial data (September 2021) has shown that Non-Performing Loans (NPLs) of banks have increased to 17.3 percent in August 2021 from 14.7 percent recorded in January. Compared to August last year, the figure was 15.5 percent.

This indicates that, despite GDP figures showing many sectors of the economy are recovering from the impact of the pandemic, businesses are still grappling with cashflow as they are unable to honour their loan obligations, thereby, increasing the default rate and causing NPLs to soar.

Dr.  Atuahene says the development can be attributed to two main things: the general economic challenges stemming from the pandemic and private sector loans taken from banks to undertake government projects which have still not been paid.

“General economic challenges arising from the COVID-19 pandemic has weakened the repayment capacity of businesses and households. Also, delay in payment of contractors and other service providers like the school feeding programme, fertilizer suppliers, among others, by government is part of the rising non-performing loans.

In fact, the Bank of Ghana report admits NPLs are increasing due to challenges the private sector is facing, especially, with regards to the impact of the pandemic. “The Non-Performing Loans (NPL) ratio increased from 15.5 percent in August 2020 to 17.3 percent in August 2021, reflecting in part the general pandemic-induced repayment challenges as well as some bank-specific loan recovery challenges,” the report stated.

This, Dr. Atuahene, has cautioned, the situation is likely to get worse and make the banking industry more vulnerable if government doesn’t take steps to pay off its debt to the private sector. “Literature shows that any non-performing loans that is above 10 percent makes the banking sector very vulnerable. So, unless government settles all these debts to businesses, the non-performing loans will remain high,” he said.

The Bank of Ghana data further reveals the situation has made banks maintain a cautious stance in lending to the private sector as annual nominal growth in private sector credit slowed to 9.5 percent in August 2021 compared with 14.3 percent in the corresponding period of 2020.

“Private sector credit growth has not fully recovered to pre-pandemic levels due to lingering supply-side risk aversion from the shock of the pandemic as well as slower-than-expected growth in demand for loans that are backed by bankable projects,” the report stated.

However, the central bank has expressed optimism that commercial banks will ease their tight credit stance in the coming months to aid in private sector recovery.

“The latest stress tests conducted on the banking sector show that banks remained resilient under mild to moderate stress conditions supported by the strong capital and liquidity buffers and the regulatory reliefs introduced during the pandemic.

In addition, results from the latest Credit Conditions Survey point to a potential increase in demand for credit over the next two months. Commercial banks have also indicated a likely softening of their credit stance to households and firms in the coming months, a development that may translate into higher credit growth to support the ongoing recovery process,” says the report.


N0n-Performing Loans (NPL) Private Sector
how can we help you?