HomenewsEnergyGhana: Price of Liquefied Petroleum Gas goes up by 5%

Ghana: Price of Liquefied Petroleum Gas goes up by 5% 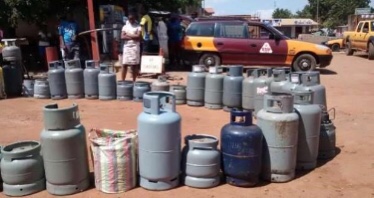 Following the restoration of the Price Stabilisation and Recovery Levy on fuel products, Liquefied Petroleum Gas (LPG) prices is set to experience a 5% adjustment from today, March 3, 2022.

Analysts have warned that the restored PSRL and its attendant increase in the price of LPG will further decrease the commodity’s consumption rate as well as  worsen the predicament of the ordinary consumer.

According to the Vice President of the LPG Marketers Association, Gabriel Kumi, the development can be attributed to the cedi’s poor performance.

He noted that, “once the cost keeps moving up and you have constant taxes and levies, you expect that the price will continue to go up.”

The LPG Marketers Association also added that the rapid change in prices is affecting their business due to the declining consumption rate of LPG.

“Business is not doing too well because if you look at the statistics, the consumption of LPG is on a serious decline. So if measures are not taken, and the price continues to go up as it is going now, there will be a lot of negative consequences.”

“Today, some of our members have started laying off workers, and we are not growing. The consequences are quite dire,” Gabriel Kumi added.

Government on the other hand, has set an agenda to make the product accessible to many Ghanaians by increasing consumption of the commodity from 25% to 50% by 2030.

However, many have argued this objective may not be achievable, considering the speed with which the commodity price is skyrocketing.

Meanwhile, the National Petroleum Authority (NPA) has said it is discussing with the Finance and Energy Ministries to find a manageable solution to the persistent rise in fuel prices.

It says the engagements will largely discuss the possible removal of some taxes on petroleum products.

The Head of Pricing at the National Petroleum Authority (NPA), Abass Ibrahim Tasunti, says the NPA has presented some proposals to Cabinet for consideration.

“Of all the taxes, which one could have been touched? From the law, the Price and Stabilisation and Recovery Levy is the one that could have been used to support the consumer. Our work is to make sure there is fair pricing,” he said.

Meanwhile, the Energy Ministry has said Ghanaians will pay back whatever government spends as subsidies.

According to the Deputy Minister, Andrews Agyapa Mercer, this calls for a conversation that ought to be had among stakeholders as the country strives to fashion out a solution to the problem.

“It’s a process that has commenced. The NPA has sent the letter to us, and we’ve forwarded it to the appropriate authorities; it’s going to be deliberated, and then whatever decision is taken is going to be in the best interest of all of us.”

“If that decision is taken that government has to subsidise fuel, we all ought to know that post the issues being resolved, prices coming down, whatever amount of money government would have expended would still have to be paid back by all of us,” he said.


Crude Oil Natural Gas prices Oil and Gas
how can we help you?