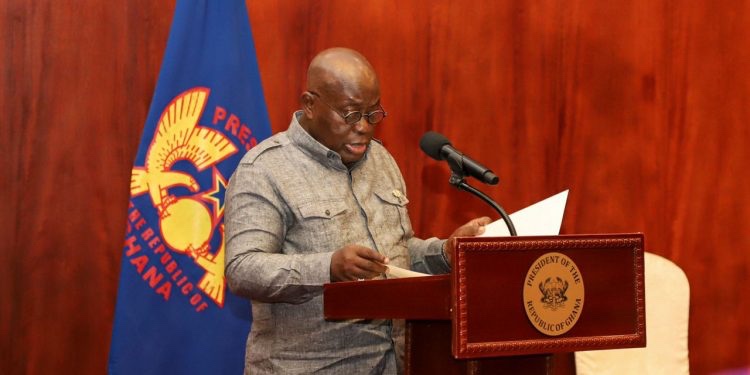 In a half-hour address broadcasted on Sunday, Ghanaian president Nana Akufo-Addo, addressed the nation to explain the raft of measures his government will be taking to see its way out of financial turmoil, including measures to support domestic production.

Among these measures, Nana Akufo-Addo announced a 30% cut in budgeted discretionary expenditures and salaries of the President, Vice President, Ministers, Deputy Ministers, and political office holders.

“We are in a crisis, I do not exaggerate when I say so. I cannot find an example in history when so many evil forces have come together at the same time.

“But, as we have shown in other circumstances, we shall turn this crisis into an opportunity to resolve not just the short-term, urgent problems, but the long-term structural problems that continue to bedevil our economy,” expressed the Ghanaian leader.

The rise of the Covid-19 pandemic ushered in an era of disillusionment. Growth slowed and money borrowed in the markets became increasingly high in price.

These difficulties were exacerbated by the impact of the Russian-Ukrainian conflict on food and energy prices worldwide. Inflation in the country is rising to over 37%, while the currency is depreciating at an unforeseen pace: Since the beginning of the year, the cedi has lost over 40% against the dollar.

Most importantly, debt, the Achilles heel of the Ghanaian economy, has soared. It now accounts for nearly 80 % of the country’s gross domestic product.

An insurmountable burden has compelled the Accra government to break with its three-year strike from demanding aid from the IMF.

This is the 17th request to the IMF for a new aid plan since the country’s independence in 1957, a hard pill to swallow for the African giant.

“We have gone to the (International Monetary) Fund to repair, in the short term, our public finances, and restore our balance of payments, whilst we continue to work on the medium to long-term structural changes that are at the heart of our goal of constructing a resilient, robust Ghanaian economy and building a Ghana beyond aid.”


Nana Addo Dankwa Akufo-Addo
how can we help you?