HomeNewsBanking and FinanceOfori-Atta is the only Finance Minister since oil production to squander ¢12.4m – Ablakwa speaks ahead of cttee sittings

Ofori-Atta is the only Finance Minister since oil production to squander ¢12.4m – Ablakwa speaks ahead of cttee sittings 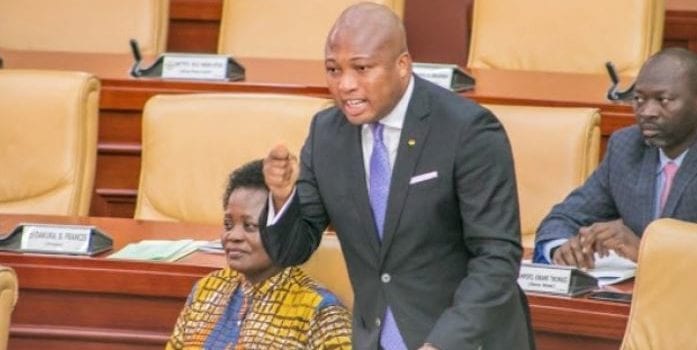 Mr Samuel Okudzeto Ablakwa, a member of the 8-member committee set by the Speaker of Parliament to investigate the allegations against the Finance Minister has indicated that Mr Ken Ofori-Atta is the only Minister of Finance in Ghana since the country started oil production in commercial quantities, to squander a staggering GHS12.4million.

Mr Ablakwa who is also lawmaker for North Tongu said Ghanaians are tired of his recklessness hence he must go.

“For the first time since Ghana started commercial oil production 10 years ago, embattled Ken Ofori-Atta becomes the only Finance Minister to squander a staggering GHS12.4million (GHS12,475,426.01) of our oil revenues to pay a judgment debt. Tired of his recklessness!” he tweeted on Monday November 14.

For the first time since Ghana started commercial oil production 10 years ago, embattled Ken Ofori-Atta becomes the only Finance Minister to squander a staggering GHS12.4million (GHS12,475,426.01) of our oil revenues to pay a judgment debt.

He added “For the avoidance of doubt, no Ghanaian Finance Minister has ever dared to touch our precious oil revenues for judgment debt. Consistent with dangerous Ken, this reckless conduct was carried out without Parliamentary approval.”

The Speaker of Parliament Alban Bagbin set a committee to investigate the allegations made against the Mr Ofori-Atta by the Minority in Parliament for which they filed a motion to get him removed from office.

The 8-member committee, co-chaired by Dr Dominic Ayine and KT Hammond, lawmakers for Bolgatanga East and Adansi-Asokwa respectively, has within seven working days to complete its work and submit the report.