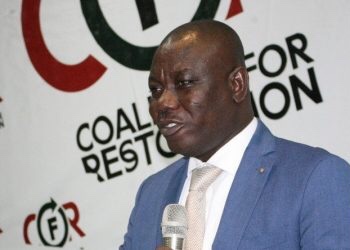 The Deputy Ranking Member on Parliament’s Finance Committee, Isaac Adongo has described as empty, President Nana Akufo-Addo’s announced measures for economic recovery while alleging that the President has lost control of the situation.

The President in an address to the nation on measures to fix the economic crisis mentioned salary cuts of the executive, a clamp down on illegal forex traders, and efforts to get cheaper petroleum products for domestic consumption as government’s magic wand.

But the Deputy Ranking Member reacting to the President’s address said government has missed the point.

“Last year, the Bank of Ghana lent to government about GH¢35 billion. By May this year, it lent an extra GH¢22 billion. This has put a lot of money into the economy. These monies are monies that are chasing the dollar everywhere. Once there is so much cedi chasing the dollar, the dollar has to run faster to save itself. This is why we are here. The Bank of Ghana has failed in all forms, and I am surprised people are pushing for the sacking of Ken Ofori-Atta and not Mr. Addison. Both of them have teamed up to derail our economy and compromise our future. ”

The Bolgatanga Central legislator also described as an exercise in futility, the clamp down on illegal forex traders.


Nana Addo Dankwa Akufo-Addo
how can we help you?