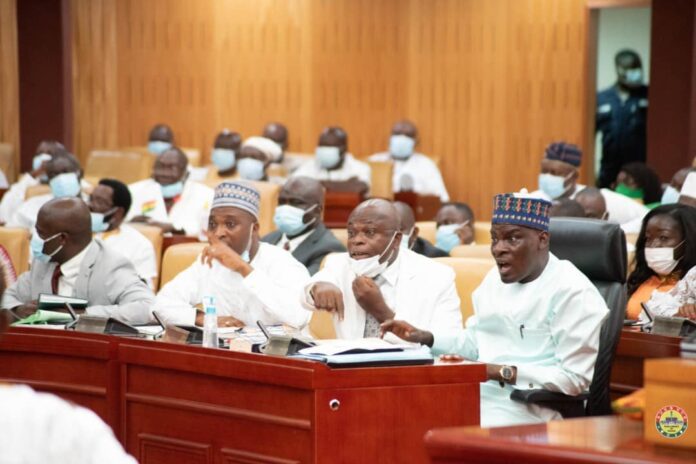 The Minority could not muster the necessary support to win the voting called despite fierce resistance to the 2.5 percent increase in the Value Added Tax (VAT) as stated in the 2023 budget statement.

The issue was put to a vote following a contentious discussion on the floor of Parliament on Thursday morning, and the Majority prevailed.

With 136 votes to the Minority’s 135, the Majority prevailed.

Many were surprised by the inclusion of the 2.5 percent increase in VAT in the 2023 budget, especially in light of the current president’s opposition to the tax’s establishment in 1995 when he was a member of the opposition.

One of the organisers of the deadly Kumi Pr3ko protest against the Rawlings-led government was Nana Akufo-Addo.

Dr. Cassiel Ato Forson, the ranking member of the finance committee, warned against the introduction of the 2.5 percent increment at this time of economic unrest when speaking against the idea on the floor of parliament on Wednesday night.

I don’t think now is the right time to adopt a VAT, a tax that seems to take away more discretionary income, he said.

The Ajumako-Enyan-Essiam Member of Parliament (MP) stated, “I implore the Ministry of Finance to wait for this step and impose this single tax handle at the correct time, during times of stability, particularly at a time when discretionary income has not been depleted by 300 percent.”

However, Nhyiaeso MP Dr. Stephen Amoah pushed back against the Ranking Member, claiming that even “big” economies like the US are struggling with inflation and raising taxes.

He claimed that the National Democratic Congress (NDC) simply wants to reject the VAT because they “want Ghanaians to vote for them” and that this will “destroy the country.”

“I am pleading with my brothers [in the Minority] to bury their ego, to stop bragging about their egotrips, and to support this excellent alternative and make sure that this nation may rise up to continue the wonderful deeds that we are doing,” he said.

The Bill for Amendments was approved.


Minority VAT
how can we help you?