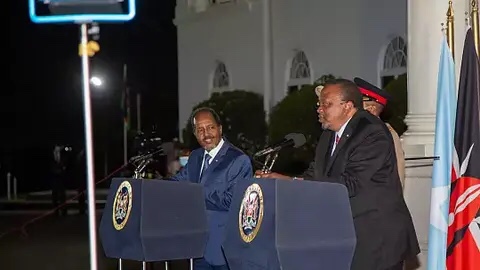 At the end of his trp, the countries’ foreign ministers announced the nations had agreed to restart with immediate effect the trade of the stimulant khat. Which means that air shipments of khat also known as miraa will resume after a 2-year hiatus.

Somalia is one of the biggest markets for miraa and central Kenyan, a big producer of the plant whose leaves and stems are a popular stimulant and appetite suppressant.

Among a range of deals signed, the leaders have directed immediate market access of fish from Somalia to Kenya and vice versa and agreed to ease some visa restrictions a s well as re-open the border.

President Kenyatta and President Mohamud have directed immediate market access of fish from Somalia to Kenya and vice versa.


Kenya Somalia
how can we help you?