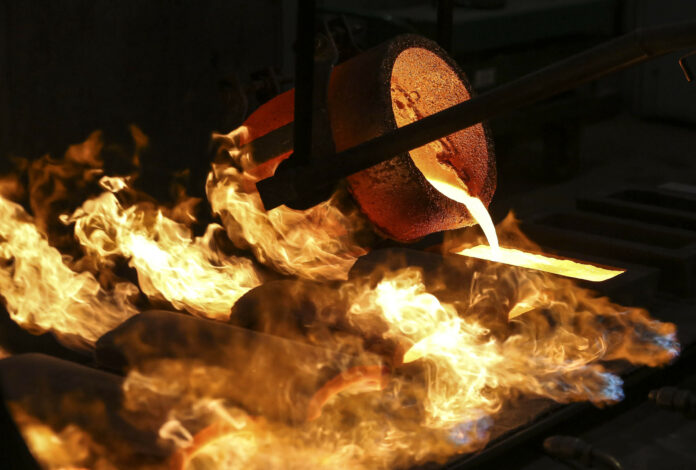 Inflation has been at the front of policymakers’ minds going into 2022, as Covid-19-related bottlenecks continue to choke supply chains.

Elevated inflation, a stubborn feature of economic recovery, is usually a good thing for gold, which is generally considered an inflationary hedge. But the pandemic also drove the popularity of another asset, cryptocurrency, which analysts say has the potential to one day overtake gold.

Now, as advanced economies flirt with the idea of a so-called “great unwind” — in which central banks withdraw accommodative monetary policy — time may be running out for gold to rally.

But, McCurrie noted, despite these conditions characterising the latter half of 2021, gold has barely moved. “In the last year that US inflation has been a problem, gold has gone absolutely sideways. It has done nothing whatsoever since July last year.”

The gold price surged to an all-time high in 2020, as the pandemic spurred demand for the precious metal. Total annual gold investment was the highest in the World Gold Council’s (WGC’s) data series and 40% above the 2019 total.

Gold is considered a safe bet during times of socioeconomic turmoil. Warren Buffett famously said investing in gold “is a way of going long on fear”.

Unlike paper money, gold stands to gain value in the wake of high inflation. In years when US inflation was higher than 3%, gold’s price increased 15% on average, according to the WGC.

Analyst and trader Simon Brown noted that the 2020 gold rally had little to do with inflation and “was very much a fear trade. That flight to gold was a flight to ‘safety’.”

Gold’s last major climb was in 2011, when paranoid investors went on a buying spree amid escalating concerns about US debt, which eventually sparked the most volatile week for markets since the 2008 global financial crisis.

In early 2021, the gold market lost momentum as investors were soothed by headway made in the global vaccine rollout. “The rest of the year was a tug of war between competing forces,” the WGC said in its 2022 gold outlook.

“Uncertainty surrounding new variants, combined with increasing risks of persistently high inflation and a rebound in gold consumer demand, pushed gold forward. Conversely, rising interest rates and a stronger US dollar continued to create headwinds. However, dollar strength led to positive gold returns in some local currency terms, such as the euro and yen among others.”

In 2022, the US Federal Reserve’s more hawkish stance on raising interest rates has weighed on gold prices. As inflation pressures stateside broadened in the latter months of 2021 — causing consumer prices to surge to a nearly 40-year high in December — the Fed may be forced to raise interest rates.

A recent report published by WCG on the relevance of gold as a strategic asset in 2022, noted that inflation will still factor into investor decisions this year. And, even as the Fed starts to hike rates, “real and nominal rates should remain at historically low levels”.

Has gold lost its shine?

But towards the end of 2021, when inflation in the US had floated above 5% of a number of months in a row, doubt was cast over the transitory narrative, Brown said.

Earlier in January, the minutes of the mid-December US federal open market committee meeting were made public. The minutes indicated that, with inflationary pressures having broadened in the latter months of 2021, quicker monetary policy tightening and a reduction of the Fed’s balance sheet may be on the cards. As rates are hiked, the dollar will increase in value, which is bad for gold buyers.

Brown also noted that gold may have lost its relevance as an investment. “If I go back to the 70s and 80s, everyone had some gold in their investment portfolios — maybe miners, maybe Kruger rands. It was the talk of the town.

“If I speak to some of the older school investors and traders out there, they typically have a little bit of gold in their portfolios. But I think a lot of portfolio managers and private clients have kind of moved on from gold … Some of them have moved on to crypto, some have moved to Tesla. But I think the mind share that gold has definitely decreased over the last three or four decades.”

Like gold, crypto also saw a major surge during the pandemic. Crypto does have the potential to overtake gold as a safe haven asset, but this will take time, Brown said.

“There still needs to be a lot more acceptance of crypto, a lot more adoption, a lot more regulation. At this point, crypto is acting like a very high volatile equity more than anything else.”

But, he said, “a lot of the gold bulls are probably too old to turn on a computer”.


First National Bank Gold price Inflation Rate Policy
how can we help you?