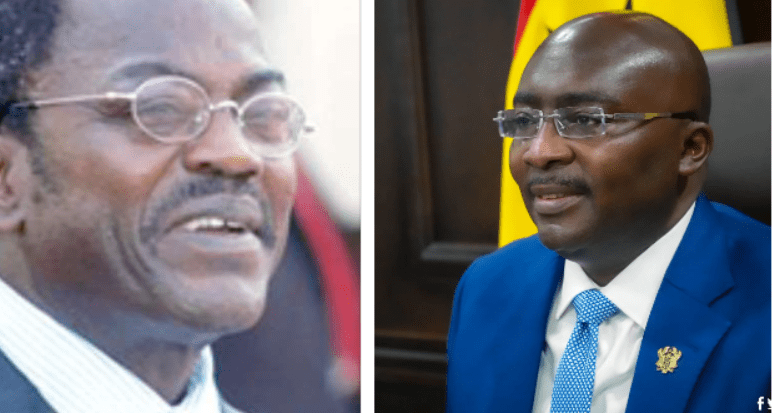 In the view of Mr Tameklo, the Vice President and the Minister of Finance Ken Ofori-Atta are the poster boys of the economic mess that the country is facing at the moment.

Given that these two officials have failed, they should not be part of the engagement with the International Monetary Fund (IMF), he said.

Speaking on the New Day show with Johnnie Hughes on TV3 Monday August 15 Mr Tameklo who is also a member of the main opposition National Democratic Congress (NDC) suggested to the President to replace Dr Bawuamia with former Governor of the Bank of GhanaDr Paul Acquah who happened to be Dr Bawuamia’s boss at the central bank when he was a Deputy Governor, on the team that is engaging the Fund.

“The poster boys of this mess are Ken Ofori-Atta and Bawumia,”Edudzi said.

“The very thing Bawumia criticized the NDC for, they are doing worse, in fact they have done a lot of terrible things. On the NPP stock, Bawumia and Ofori-Atta are not the best, we have the former BoG Governor Paul Acquah,” Mr Tameklo added.

Speaking on the same show, Government Spokesperson on Governance and Security Palgrave Boakye-Danquah said the government is optimistic that the IMF deal will happen by end of this year or early next year.

“By the end of the year or early 2023, we should have positive feedback from the IMF,” he said.

He added “We welcome all ideas, we are confident that the programmes that we have put in place will yield results.”

Fitch ratings recently said it strongly believes Ghana’s deal with the IMF is likely to happen within the next six months.

Fitch estimated that a programme could disburse as much as USD3 billion and unlock budget support from other multilateral lenders.

“In July 2022, the authorities reversed a long-standing position against seeking IMF support. Fitch believes that a deal with the IMF is likely within the next six months. We estimate that a programme could disburse as much as USD3 billion and unlock budget support from other multilateral lenders.

“However, the timing of such a deal is uncertain and would be dependent on the government’s ability to present a credible fiscal reform plan in line with increasing government revenue and improving debt affordability metrics.

“The most recent IMF debt sustainability analysis, conducted in 2021, found Ghana at a high risk of debt distress and vulnerable to shocks from market access and high debt servicing costs,” Fitch said while announcing a downgrade of Ghana’s economy to ‘CCC’ from ‘B-‘ on Wednesday August 10, 2022.


Dr Mahammud Bawumia IMF program
how can we help you?