HomeNewsEconomicsGhana’s Public Debt Up By GH¢41.6 billion In The First Half Of 2022, Debt-To-GDP Ratio Hits 78.3% 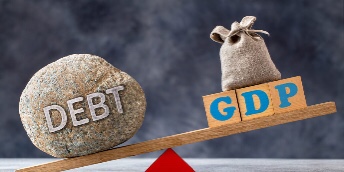 Ghana’s stock of public debt went up by GH¢41.6 billion in the first six months of the year, pushing the debt-to-GDP ratio further into unsustainable levels.

According to latest Summary of Economic and Financial data released by the Bank of Ghana (BoG), gross public debt of the West African nation rose to GH¢393.4 billion at the end of June 2022, accounting for 78.3% of the country’s GDP.

The rise in gross public debt in the first half of the year was driven by a significant increase in the external debt component. External debt rose to GH¢203.4 billion at the end of June 2022, up from 170.0 billion at End-December 2021. This means this component of debt rose by GH¢33.4 billion or 19.6% in the last six months.

Given that Ghana has lost access to the international capital market this year due to downgrades by major rating agencies, the increase in external debt could be as a result of the rising interest payments driven by rising risk premium and the depreciation of the local currency.

Ghana’s debt to Gross Domestic Product (GDP), according to Bloomberg, is estimated at 84.6% by the end of this year, showing that the nation’s debt will have surpass GH¢400 billion by far, before the end of 2022.

As of the first quarter of 2022, Ghana’s public debt had hit GH¢391 billion (US$50.3 billion), the Bank of Ghana reported. As much as GH¢40.1 billion was added to the debt stock, largely as a result of exchange rate fluctuation.

Together with Brazil, Ghana’s interest expense to GDP is projected to hit 7.2% in 2022, the highest among the 25 countries, captured by Bloomberg. This means the two countries will spend more money to service their debts in 2022.

Already, the International Monetary Fund cautioned that more than 30% of emerging and developing countries are at or near debt distress, with 60% from developing economies.

According to Bloomberg, Tunisia with a debt-to-GDP ratio of 87.3% is ranked 3rd among countries that are at risk of debt default.

Ghana’s situation prior to announcement by the government to seek IMF bailout was precarious as investors had perceived the Ghanaian economy as risky, therefore escalating the yield on Ghana’s Eurobonds.


GDP
how can we help you?