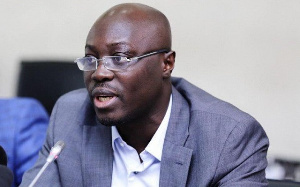 Ranking Member of the Finance Committee in Parliament, Cassiel Ato Forson, has said the recorded fiscal deficit of 15.4 percent at end-2020 is a complete outlier when compared to other countries in the sub-saharan region.

Making the assertion at a policy dialogue forum on Ghana’s economy held by the Minority in Parliament on Monday, July 26, the former Deputy Finance Minister, indicated that government cannot continue to justify and attribute the high fiscal deficit incurred last year to Covid-19 related expenditures.

“Nigeria did 4.1 percent, Kenya did 8.4 percent, Ivory did 5.9 percent, and so why is Ghana a complete outlier? Or is it because of elections because that might be the answer,” he remarked.

Recorded fiscal deficit for end-2020 according to the Finance Ministry was 11.4 percent – including energy sector and bailout costs, the deficit increases to 15.4 percent.

The Ministry has often times blamed the high deficit to the fiscal impact of the Covid pandemic which resulted in a significant fall in revenue streams and increased government expenditures.

According to government, the fiscal impact of the Coivd pandemic was some Ghs 25.2 billion (6.5% of GDP).

Meanwhile, the Ranking Member has also made a bold prediction asserting that Ghana in the next 18 months will default on its debt service obligations to creditors.

According to the Ranking Member, Ghana’s inability to meet its debt service obligations by February 2023, will be inevitable should government continue to disregard advice and not take advantage of the Debt Service Suspension Initiative (DSSI) instituted by the Group of 20 (G20) and supported by the International Monetary Fund and the World Bank.

He noted that given the country’s inability to raise enough tax revenues to service existing debt obligations coupled with increasing debt accumulation, Ghana will default on its debt obligations which will plunge the country into a deeper economic crisis.

He therefore urged government to apply for the DSSI.

The DSSI is a policy that allows bilateral and multilateral creditors, in a limited period, suspend debt service payments for developing and lower-middle-income countries.

It is also to help countries concentrate their resources on fighting the pandemic and safeguarding the lives and livelihoods of millions of the most vulnerable people.

Presently, about 30 Sub Saharan African nations including Kenya, Ivory Coast, Togo and Ethiopia are on the programme giving them some temporary suspension of debt-service payments owed to their official creditors.