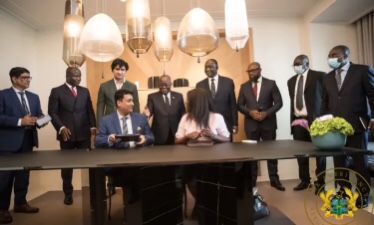 The Ghana Trade Fair Company Limited has signed a memorandum of understanding (MoU) with the Stellar Holding Pte. Ltd, a company registered under the laws of Singapore, to establish a joint venture company for the financing and redevelopment of the Trade Fair site.

The agreement should see an estimated investment of $1 billion, sourced by the Singaporean company for the development of 65 acres of the 140-acre large Trade Fair site, in the prime La area of Accra, the Ghanaian capital.

“This is great news for Ghana, the people of La, and the African continent as a whole,” said Dr Dan McKorley, the Chairman of the Trade Fair Company, adding that,“the COVID-19 pandemic dealt a big blow to our plans as investors cooled off. So we are happy to get back fully on track and with such serious group of credible investors as well.”

The two parties, (Ghana Trade Fair Company and Stellar Holding) signed the agreement on Thursday, 10 March 2022, in Dubai as part of President Nana Akufo-Addo’s investor-rounds in the United Arab Emirates (UAE), on the sidelines of the ongoing Dubai Expo 2020.

According to the MoU cited by Asaase News, “the Parties, following extensive discussions, agree to cooperate with each other to develop the Trade Fair site and intend to jointly establish a Joint Venture Company (JV company), with a suitable name as approved by the authorities, in the jurisdiction of Ghana”.

The MoU further states that “the JV Company shall be established for the purposes of developing and financing the development of world class luxury hotels, high-end malls and other residential and commercial developments (Phase 2) on the identified parcel of land belonging to the Second Party (Ghana Trade Fair Company) and measuring approximately sixty-five (65) acres”.

The two parties also agreed that “any dispute arising out of or in connection with” the MoU, “including any question regarding its existence, validity, termination, or damages for its breach, shall be referred to and finally resolved by the appropriate Courts in Ghana under the laws of Ghana and the decision of such forum shall be final and binding”.

The MoU will expire in six months from the date of its execution (10 March 2022). It is expected that from now till 10 September 2022, the expiration date, the parties would have entered into a proper contract for the construction of the new Trade Fair to begin.

Prior to the signing ceremony, on Wednesday 9 March 2022, the Executive Chairman of Stellar Holding, the Indian billionaire Sanjeev Mansotra, hosted President Akufo-Addo and his delegation to a working lunch, at the Bulgari Resort in Jumeirah, Dubai. Various investors and investment partners of Stellar Holding, took part in the meeting.

The participants included hoteliers, real estate developers, famous film producers, operators of shopping malls and industrialists, many of whom are part of the team put together by Stellar Holding, for the Trade Fair redevelopment project.

The parties are expecting to cut sod for the commencement of construction works later on this year.

In a related development, the Ministry of Finance and the Ghana Commercial Bank are working on a $200 million financial facility for the construction of a new exhibition centre alongside the biggest convention centre in Africa.

The 24,000-capacity convention centre is the centerpiece for the redevelopment of the Ghana Trade Centre, after the entire site was cleared last year for redevelopment to begin.

A convention centre was a key component of the original Trade Fair plan developed under Ghana’s first President, Dr Kwame Nkrumah. However, one was never built over the last six decades.

The timing and capacity of the convention centre now is seen as most opportune, complimenting Ghana’s status as the “commercial centre” of Africa, hosting the secretariat of the African Continental Free Trade Area (AfCFTA).

It is expected to alder serve as the best venue in Africa for concerts, also complimenting Ghana’s growing status as the destination of choice for young tourists during the Christmas festive season.

Other developments coming up on separate sites of the Trade Fair will include a tech hub, built to serve a global market.


Ghana Trade Fair
how can we help you?