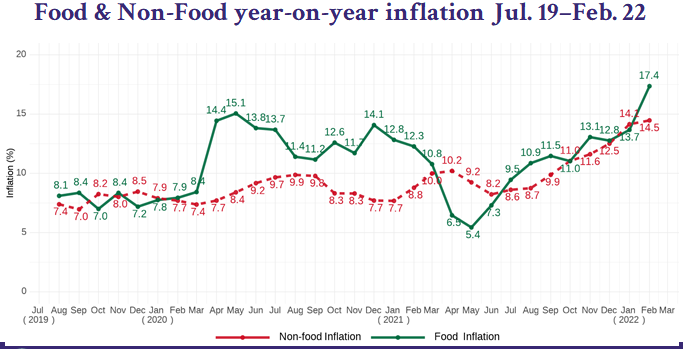 Ghana’s inflation rate has once again risen to hit 15.7 percent in February 2022.

This represents a 1.8 percent jump in the inflation rate compared to the 13.9 percent recorded in the first month of this year.

The current rate is the highest recorded since the rebasing of the CPI and inflation in August 2019.

This new rise in the inflation rate confirms predictions by economists and stakeholders that prices of fuel and food will continue to rise following tensions between Ukraine and Russia.

Already, Ghanaians are bearing the effect of the tensions on the price of fuel, which in turn has led to an increase in transport fares.

According to data from the Ghana Statistical Service, the 15.7 percent increase in February 2022 was mainly influenced by housing, water, electricity and gas (25.4%); transport (18.3%) as well as food and non-alcoholic beverages (17.4%).

Food inflation regained its dominance, recording 17.4 percent year-on-year inflation, as against the 13.7 percent recorded in the previous month, all above a national average of 15.7 percent.

All the 15 food subclasses recorded positive month-on-month inflation, with water recording the highest (9.0%).

Only one out of the 12 Non-food Divisions had the 12-month rolling average to be higher than the year-on-year inflation for February 2022 for the divisions.

At the regional level, the overall year-on-year inflation ranged from 11.6% in the Western Region to 19.5% in
the Greater Accra Region.

Consumer Inflation Inflation Rate
how can we help you?