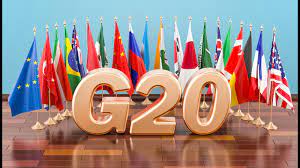 he members of the G20 have reached an agreement on a deal that would set a minimum tax rate for major companies, German Finance Minister Olaf Scholz said on Saturday.

The comments came amid talks between the finance ministers from the world’s largest economies in Venice, Italy.

While progress was made, a final agreement on the minimum tax rate is not expected until the G20 leaders’ summit in October.

What did the ministers say?

The ministers signed on to a global minimum tax for major corporations and to tax multinationals, Scholz told reporters during the G20 finance minister meeting in Venice.

“Today, we see that all the countries that are coming together here will support this international process in finding a way to a minimum taxation,” Scholz said.

The German finance minister added that now that the G20 members are on board, the focus will turn to how to put the measures into action so they can take effect by the current 2023 deadline.

“That is very, very little time,” Scholz said, but noted that major progress had been made.

DW’s Bernd Riegert noted that the decision means “the end of tax havens might be near.”

US Treasury Secretary Janet Yellen said that while Washington will seek to address the concerns from some reluctant countries, “it’s not essential that every country be on board.”

“This agreement contains a kind of enforcement mechanism that can be used to make sure that countries that are holdouts are not able to undermine — to use tax havens that undermine the operation of this global agreement,” she said.

Some EU member states, including Hungary and Ireland, were holding back. Ireland houses the European headquarters of some tech giants, including Google and Facebook, due to its low tax rates.

What is the global tax reform plan?

The US had proposed the minimum corporate income tax of 15% to stop tax havens from competing to attract major companies.

Over 130 countries already backed the plan, brokered by the Paris-based Organization for Economic Cooperation and Development (OECD).

The 15% minimum rate would affect fewer than 10,000 multinational companies, those with an annual turnover of more than €750 million ($890 million).

The second component of the reform would give countries the right to tax multinationals for profits earned in the country. This measure would particularly impact tech giants like Google, Facebook, Amazon and Apple.

The G20 members — comprised of the world’s largest economies — are expected to benefit the most from the planned tax reform.

It would bring around $150 billion (€127 billion) in additional tax revenues globally.


G20 Global Minimum Tax Global Tax Reform
how can we help you?