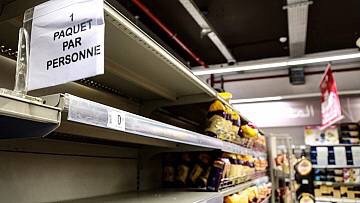 Tunisians have been hit with soaring food prices and shortages of basic staples in recent weeks, threatening to turn simmering discontent in the North African country – the cradle of the Arab Spring protests – into larger turmoil.

People stand in line for hours for these food essentials that have long been subsidized and are now increasingly available in rations only.

And when they appear on the shelves, many people cannot afford to pay the staggering price for them.

The government has blamed speculators, black market hoarders and the war in Ukraine, but economic experts say the government’s own budget crisis, and its inability to negotiate a long-sought loan from the International Monetary Fund, have added to Tunisia’s troubles.

Fights sometimes break out at food market queues, and scattered protests and sporadic clashes with police over rising prices and shortages have occurred around the country.

In a suburb of the capital, Tunis, a young itinerant fruit vendor recently killed himself after police seized the scales he used to weigh his wares.

His act of desperation revived memories of the 2010 self-immolation of another Tunisian vendor, Mohamed Bouazizi, which prompted protests that led to the ouster of long-time dictator Zine El Abidine Ben Ali, and provoked similar uprisings around the Arab world.

“I came to shop and found people fighting to buy and the prices were very high,” said shopper Amina Hamdi, despairing at trying to buy basic goods.

“It is not possible to live without food,” said Aicha during a recent shopping trip to the fish and meat market in Tunis. “We can live without furniture, construction material, but we have to eat.” She only gave her first name for fear of persecution by police for speaking out.

The Ministry of Commerce promised last month that shortages would ease, announcing the import of 20,000 tons of sugar from India to be available in time for Mouled, the birthday of the Prophet Muhammad.

But the night before the holiday, citizens formed long lines in front of supermarkets in the hope of getting a package of sugar, an essential food to prepare traditional dishes for the religious holiday.

Food isn’t the only thing in short supply. Lacking energy resources like those in neighboring Libya and Algeria, Tunisia relies heavily on imports and its long-running economic troubles mean it has limited leverage on international markets to secure the goods it needs.

Inflation has reached a record rate of 9.1%, the highest in three decades, according to the National Institute of Statistics.

In Douar Hicher, an impoverished suburb on the outskirts of Tunis considered a barometer of popular discontent, hundreds of people took to the streets at night last month to denounce the deterioration of their living conditions.

With cries of ” work, freedom, dignity” – the flagship slogan of the 2010-2011 revolution – demonstrators blocked the town’s main artery by setting fire to tires, braving the police who sprayed tear gas to disperse them.

“Enough of speeches and promises, people are gripped by hunger and poverty,” read a banner erected by the demonstrators, their anger at the government and political elites palpable.

After sacking the prime minister and dissolving parliament, President Kaïs Saied has granted himself sweeping powers over the last year.

He said the moves were necessary to save the country amid protracted political and economic crisis, and many Tunisians welcomed them, but critics and Western allies say the power grab jeopardizes Tunisia’s young democracy.

Saied attributes the scarcity of food products and the rise in prices to “speculators” and those who hold a monopoly on goods they store in illegal depots.

He suggested that his main political rival, the Islamist movement Ennahdha, had some role, which the party firmly denies.

In a statement, the Salvation Front, a coalition of five opposition parties and several independent groups, called the demonstrations a sign of “a general explosion and the collapse of the social and political order.”

The government is currently negotiating a $2 billion to $4 billion loan with the IMF to cope with a budget deficit aggravated by the COVID-19 pandemic and the fallout from Russia’s war in Ukraine. A high-ranking Tunisian delegation went to Washington on Saturday in the hope of finalizing a deal.

In return, Tunisia will have to commit to painful reforms, including shrinking the public administration sector – one of the world’s largest – which eats up about a third of the state budget.

The IMF is also demanding the gradual lifting of subsidies and the privatization of state-owned enterprises, which implies massive layoffs and a worsening of unemployment, already at 18% according to World Bank’s latest figures

Faced with such bleak prospects, Tunisians increasingly no longer hesitate to put their lives in danger to try to reach Europe in search of a better life.

The Tunisian Forum for Economic and Social Rights, an NGO that closely monitors migration, says 507 Tunisian migrants died or gone missing so far in 2022.

According to National Guard spokesman Houssameddine Jebabli, the coast guard thwarted more than 1,500 attempts at illegal migration to Italy from January to September 2022, involving entire families including nearly 2,500 children.


Tunisia
how can we help you?