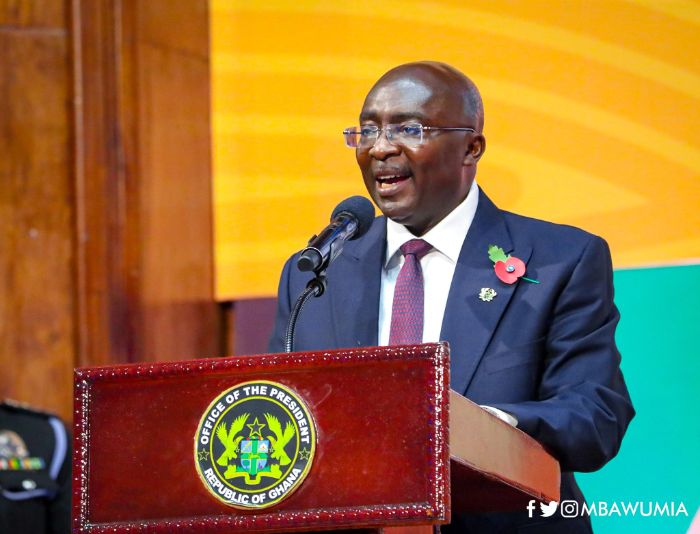 Vice President Dr Mahamudu Bawumia has announced that the first shipments of refined oil procured under Ghana’s newly implemented gold-for-oil policy will arrive in the country in Januar 2023.

This follows the conclusion of all arrangements necessary for the  policy to be into effect.

In a post on his Facebook page dated Thursday, December 22nd 2022, the Vice President revealed: “I am happy to announce that the Government of Ghana has concluded the arrangements for the operationalization of the Gold for Oil policy.”

Bawumia added; “Consequently, the first oil products under the policy will be delivered next month (January 2023). My thanks to the Minister for Energy, Minister for Lands and Natural Resources, Governor of the Bank of Ghana, the Chamber of Mines, PMMC and BOST for their leadership in the operationalization of the Government’s Gold for Oil Policy. God bless our homeland Ghana.”

The gold-for-oil policy is an innovation spearheaded by Vice President Dr Bawumia, who conceptualised the policy as a means of tackling the never-ending issue of cedi depreciation and its attendant effect on the local economy.

The policy will see the government of Ghana using its gold reserves rather than dollar reserves to import refined oil products.

The policy is expected to lead to the exchange rate of the cedi to the U.S dollar being taken out of the equation when it comes to pricing fuel products in Ghana.

This, the Vice President surmises, would insulate the local economy from the vagaries of the foreign exchange market and consequently lead to the reduction of fuel prices and consequently, transport fares, prices of goods and even the prices of electricity tariffs.

The policy has been described as a step in the right direction by aninternational expert on African affairs, Canada’s John Philpot, whilst controversial political analyst Kwame Asare Obeng, popularly known as A Plus, and veteran journalist Kwesi Pratty Jnr, among others, have all tagged it as a brilliant idea.