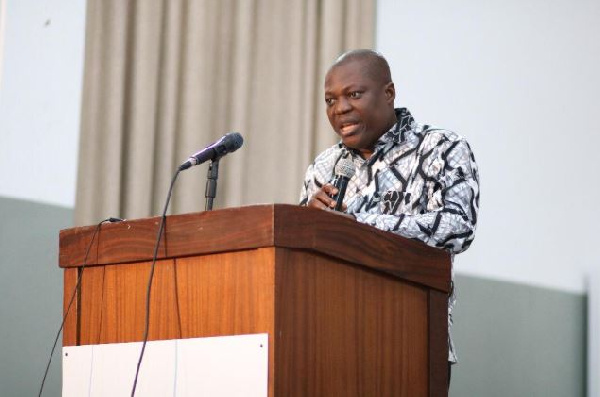 The Dean of the University of Cape Coast Business School, Professor John Gatsi, has cast doubt on the accuracy of the projection made by the Economist Intelligence Unit (EIU) on the local currency.

In its latest assessment of the Ghanaian economy, the London-based organisation indicated that the cedi’s recent depreciation against the dollar would cease till at least the end of the year.

It noted that the local currency will end the year at around ¢7.87 against the dollar, indicating a slowdown in the cedi’s poor performance.

But Professor Gatsi disagrees with their assertion.

According to the economist, discussions surrounding the currency’s stability can be held, but the EIU cannot indicate that this is the end of erratic depreciation for the entire year.

“We cannot predict from now until the end of the year the shock that may affect the economy, whether from the domestic economy or the international developments.

“We were not expecting that there will be some crisis between Ukraine and Russia. However, it happened, and it has its effect on the global economy and currency management, and we do not know what shock will come ahead of us,” he said.

Based on the forecast by the EIU, one can say the cedi’s worse and challenging depreciation against the US dollar is over.

Some may also argue that the depreciation rate against the dollar will slow down significantly over the next eight months of this year.

This is because, based on the average quotes by some of the major commercial banks in the country, they are selling a dollar ¢7.80 to their retail clients.

The development may mean that for the next eight months, the cedi’s depreciation against the dollar may not be more than ¢0.7.

It may bring some comfort to businesses that had raised concerns about the sharp depreciation rate against the dollar in the past.

EIU on cedi’s woes in the first quarter of 2022

The cedi weakened sharply in the first two months of 2022, reflecting increased demand for hard currency due to a strengthening in Ghana’s (structurally import-dependent) business activity and profit repatriation by Ghana-based multinationals (which is primarily carried out during the first quarter of the calendar year).

Some $300m had been released as of early March.

Regardless, strengthening growth will continue to reinforce import dependency, causing the cedi to depreciate on average over 2022.

The Unit said some further tightening by the Money Policy Committee of the Bank was needed to supply-side price pressures – including high utility and food prices, new taxes, rising global commodity prices and heightened freight charges, alongside supply-chain disruptions due to the Ukraine conflict, which are likely to keep inflation (especially fuel costs) elevated in 2022.

We expect the headline inflation rate to remain high (averaging about 15%) throughout early 2022, driven by supply-side price pressures, including rising global oil and food prices—exacerbated by logistical bottlenecks related to the Russia-Ukraine war.—and high utility and transport costs.

Average inflation will rise from 10% in 2021 to 13.4% in 2022 as prices for global commodities continue to increase, domestic demand starts to pick up further, and the currency depreciates sharply.

This will reflect monetary tightening and weakening supply-side price pressures as the forecast period progresses, in part offset by ongoing local-currency depreciation.


EIU Ghana Cedis Ghana Economy
how can we help you?