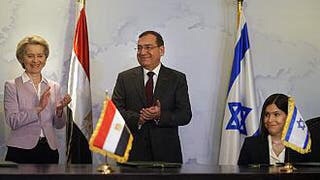 Egypt, Israel, and the European Union on Wednesday signed a deal to increase liquified natural gas sales to EU countries, which aim to reduce dependence on supply from Russia as the war in Ukraine drags on.

Egypt, Israel and the European Union struk a deal on Wednesday which will see the North African nation receive more Israeli gas to liquify it for export by sea. The deal comes as the E.U has had difficulty banning Russian fossil fuel imports in retaliation for the war in Ukraine. During a joint press conference with Egypt’s President, the E.U chief reiterrated her block’s ambition to end its reliance on Russian engery.

“I very warmly welcome the signing of this historic agreement […] We want to get rid of this dependency. We want to diversify to trustworthy suppliers, and Egypt is a trustworthy partner“, von der Leyen said.

“Today we are already taking a very important step, as we have in the morning signed a memorandum of understanding of natural gas delivery from Israel to Egypt, here the liquefying of the gas, and then the transport to the European Union. […], but also for Egypt, to become a regional energy hub“, President Abdel Fattah el-Sissi told reporters.

The deal was signed in a Cairo hotel by Israel’s Energy Minister Karin Elharrar, the Egyptian Minister of Petroleum, Tarek el-Molla, and the EU Commissioner for Energy Kadri Simson.

The deal provides the EU will help Egypt and Israel increase their gas production and exploration in their territorial waters. It’s unclear clear how much gas the EU will import from either country.

Last year, the European Union imported roughly 40% of its gas from Russia. Moscow said on Tuesday, it would be slashing gas deliveries to Germany by more than 40 percent due to the “repair” of compressor units .

Egypt, Israel and the European Union struk a deal on Wednesday which will see the North African nation receive more Israeli gas to liquify it for export by sea. Following the signing by Israel’s Energy Minister, the Egyptian Minister of Petroleum and Ursula von der Leyen, the EU Commision President and the Egypt’s President held a joint press conference in Cairo.

Last year, the European Union imported roughly 40% of its gas from Russia. Moscow said on Tuesday, it would be slashing gas deliveries to Germany via the Nord Stream pipeline by more than 40 percent due to the “repair” of compressor units by German company Siemens.

Egyptian Petroleum Minister Tarek el-Molla described the deal as “an important milestone” for cooperation between Egypt, Israel, and the EU. He said it will lead to further cooperation between members of the East Mediterranean Gas Forum, which includes Jordan, Israel, Cyprus, Greece, Egypt, the Palestinian Authority, France and Italy.

According to the deal, the Israeli gas will be brought via a pipeline to Egypt’s LNG terminal on the Mediterranean before being transported on tankers to the European shores, Israel’s Energy Ministry said.

El-Sissi and von der Leyen also focused on the food crisis caused by the Russian-Ukraine conflict. Egypt, the region’s most populous nation, has been impacted badly by the war in Europe, which has shaken the global economy.

The European official said the EU will provide 100 million euros (around $105 million) for “immediate relief” to help Egypt, the world’s biggest wheat importer, address food insecurity in the short term.


Africa Egypt Russia-Ukranie war
how can we help you?