HomeNewsEconomicsCedi projected to depreciate by 20%

Cedi projected to depreciate by 20% 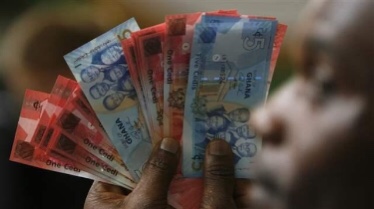 Corporate and Investment Division of FirstRand Bank – RMB – is projecting a more than 20% depreciation rate of the cedi against its anchor currency – the US dollar.

The forecast by RMB for the next 12 months, is on the back of the sharp decline in the value of the local currency on the back of increased demand for the dollar-induced liquidity tightening due to recent downgrades of the nation’s Eurobonds, half-decade high inflation, and dwindling confidence in the nation’s policy credibility, among others.

The cedi’s woes has further been exacerbated by the ongoing Russia-Ukraine crisis, which has led to a rise in the prices of commodities on the global market as the cedi dipped 6.7% month-to-date against the dollar, 16.9% year-to-date (YtD) and 21% on a year-on-year (YoY) basis.

In a report signed by economist Daniel Kavishe, RMB forecasted the non-deliverable forward (NDF) – a cash-settled, and usually short-term, forward contract market – would price-in further weakness over the next year, resulting in the cedi trading at an all-time low against the greenback.

“NDF markets are a pricing-in further weakness of 20% over the next 12 months, with the expectation that the cedi will be trading at 8.7 against the dollar by the end of 1Q23,” RMB said.

The cedi’s performance has defied interventions by the Bank of Ghana (BoG) in the process. At the last FX forward rate auction on 8 March 2022, the Treasury sold a total size of US$75million against a total bid worth US$296.75million demanded by investors across 7- to 45-day tenors. This represents a bid cover a ratio of 3.96x, highlighting the strong demand for US dollars.

In view of this, RMB is less than optimistic that further interventions by the apex bank will reverse the cedi. Rather, it called for pragmatic measures from the fiscal authorities aimed at renewing confidence in the economy.

“We maintain our view that unless confidence is reignited on the fiscal side, the currency market will remain frail and volatile. The central bank is expected to continue intervening; but given broader macroeconomic concerns, this may not be enough to stave off further weakness,” RMB stated.


Ghana Cedis
how can we help you?