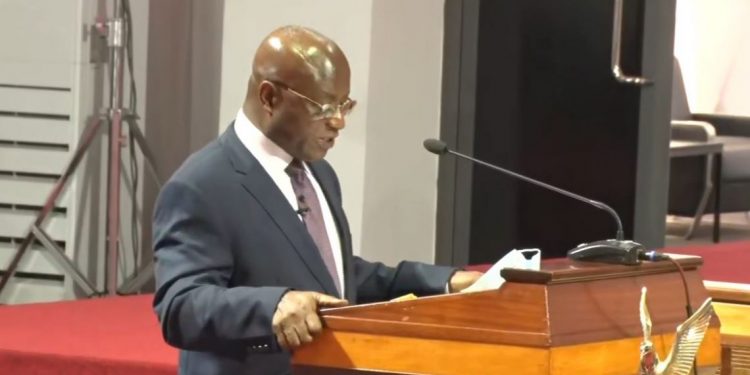 After a year of havoc, wreaked on the economy by COVID-19, the government has laid a blueprint of bold policies and programmes to stop the spread of the virus and contain its effects; revert the economy onto the path of transformational growth and ensure prosperity for all Ghanaians.

In the country’s first budget since the virus struck in March last year, the government sought the permission of Parliament to raise more revenue from the public, grant tax rebates to businesses and increase spending on infrastructure and productive sectors in a burden-sharing effort meant to pull the nation out of the clutches of the pandemic.

The Minister of Parliamentary Affairs, Mr Osei Kyei-Mensah-Bonsu, who presented the 2021 Budget Statement and Economic Policy Statement yesterday in the absence of a substantive Minister of Finance, told Parliament that this year’s revenue and expenditure estimates were also aimed “to bring an end to the culture of unfinished projects.”

“The main focus of the government for this year is the fulfilment of existing commitment and the completion of existing projects,” Mr Kyei-Mensah-Bonsu, who is the Caretaker Finance Minister, said.

With President Nana Addo Dankwa Akufo-Addo declaring 2021 as the second year of roads, the minister pointed out that the government would continue to prioritise road construction.

In that regard, he said, the government would pursue a number of ongoing projects that were at various stages of completion under the Sinohydro master facility.

Mr Kyei-Mensah-Bonsu further stated that works on the Pokuase and Obetsebi Lamptey Circle Interchanges were expected to be completed by the end of 2021.

Besides, he said ongoing works on the construction of bridges in the Northern Regions were 97 per cent complete. The bridges are located in Kulun, Garu, Ambalara, Kulungugu, Doninga and Sissili.

Furthermore, the minister said Public Private Partnerships (PPP) programme for the financing, construction and management of four projects were at different stages of preparation.

The minister further outlined how the government intended to raise funds to meet its expenditure target.

He said the amount would be the wage bill, interest payments, COVID-19 related expenditures, security and funding of government flagship programmes.

To achieve that, he sought approval from Parliament to spend GH¢113.75 billion, equivalent to 26.2 per cent of the country’s gross domestic product (GDP) in the 2021 financial year to effectively roll out its policies.

Christened, ‘Wonya Wohie’ Budget, literally meaning “We are moving forward”, the government intends to use its policies which are also meant to restore hope and confidence in the people to increase GDP growth to five per cent by the close of the year.

It was on the theme: “Consolidation, completion and continuity,” and was the first by President Nana Addo Dankwa Akufo-Addo after he won a re-election bid in the December 2020 general election.

Giving a breakdown of the expenditure, Mr Kyei-Mensah-Bonsu said GH¢25.8 billion would be spent on wages and salaries, GH¢5.97 billion would be used for goods and services of government machinery, GH¢35.86 billion for interest payments, and capital expenditure projected at GH¢11.423 billion.

The Majority Leader and Parliamentary Affairs Minister announced this when he presented the 2021 Budget and Economic Statement to Parliament yesterday.

He indicated that GH¢27.4 billion had already been earmarked to run the country between January and March 2021, pending the preparation of a full budget as presented yesterday.

Providing further details in his three-hour-and-four-minute long presentation, the caretaker Finance Minister said wages and salaries were projected at GH¢25.79 billion and constituted 22.7 per cent of the total expenditure (including arrears clearance) for 2021.

Use of goods and services is also projected at GH¢5.97 billion or 1.4 per cent of GDP. This represents 5.2 per cent of the projected total expenditure.

With regard to interest payments, the Caretaker Finance Minister said it was projected at GH¢35.86 billion, equivalent to 8.3 per cent of GDP in 2021.

Of the amount, domestic interest payments will constitute about 79.1 per cent, amounting to GH¢28.368 billion. Transfers to statutory funds as well as all other earmarked funds are estimated at GH¢18.081 billion (4.2 per cent of GDP), representing 52.2 per cent growth over the recorded outturn for 2020.

Furthermore, an amount of GH¢8.11 billion has been estimated for foreign financed capital expenditure and this will be funded by a combination of project grants and loans.

Mr Kyei-Mensah-Bonsu said in 2021 the government would continue to implement the Earmarked Funds Capping and Realignment Act, 2017 (Act 947) to reduce budget rigidities and create fiscal space to fund growth-enhancing expenditures as had been done since 2017.

“Mr Speaker, transfers to earmarked funds include a proposed 20 per cent of the allocation for ABFA Capex to the Ghana Infrastructure Investment Fund (GIIF) for funding of Agenda 111 and other development expenditures. We will lay the necessary amendments to allow for this measure,” he added.

The Majority Leader said the government was confident that the implementation of the measures outlined in the budget would result in the economy expanding by five per cent this year, up from a projected growth rate of 0.9 per cent this year.

He said the growth would be led by the services sector, which was projected to grow at 5.8 per cent.

On revenue measures, the Caretaker Finance Minister said while the government recognised that “times are hard for many of our people,” it was important that the citizens put their shoulders to the wheel to rebuild and strengthen public finances.

That, he said, was needed to provide the resources to protect the lives and livelihoods of Ghanaians, deliver critical government services and support the transformation of the economy.

To that end, he said, the government had proposed the introduction of a COVID-19 Levy, a Sanitation and Pollution Levy (SPL), an increment in the Energy Sector Recovery Levy under the Energy Sector Levy Act (ESLA), a Financial Sector Clean-up Levy on the gross profits of banks and an upward review of road tolls to help mobilise resources to fund the economic recovery and growth agenda.

He said while the COVID-19 Levy would be a one percentage point increase each in the National Health Insurance Levy and the Valued Added Tax (VAT) Flat Rate, the Energy Sector Recovery Levy and SPL would be 20 pesewas and 10 pesewas each on every litre of petrol/diesel.

On the Financial Sector Clean-up Levy, Mr Kyei-Mensah-Bonsu said it would be five per cent on the profit-before-tax of banks to help raise funds to defray the more than GH¢21 billion financial commitments that the state had made into the resolution of the nine troubled banks.

The Majority Leader observed that based on the estimates for revenue, grants and expenditure, the 2021 fiscal operations would result in an overall fiscal deficit of GH¢41.298 billion, equivalent to 9.5 per cent of GDP.

He said financing of the fiscal deficit would come from both domestic and foreign sources.

“A corresponding primary deficit equivalent to 1.3 per cent of GDP is also projected for the year,” he said.

A Professor of Economics, Prof. Peter Quartey, said in an interview that the budget was a bold “give and take” tool by the government to weather the storm brought about by COVID-19.

He said new levies and taxes were needed to raise revenue to fund the reliefs and financial supports proposed for households and businesses relevant to the recovery agenda of the government.

He said while the revenue measures ran counter to the growth recovery pursued by the government, they were better than increased borrowing, which was the only available.